Now you know your maki from your chirashi, can read the list of ingredients like a true Japanese native and even remember that it’s bad form to mix wasabi and soy sauce. But there is still one level of intimidation left: sitting and ordering at the sushi bar. Here, you have none of the anonymity of hiding behind a menu. Decisions have to be taken quickly and dining becomes a public venture.

But it’s also a chance to watch sushi-making in motion (which is often a form of art!), interact with other connoisseurs get the top choices of the menu. And it’s really not that difficult – as long as you mind a few things. 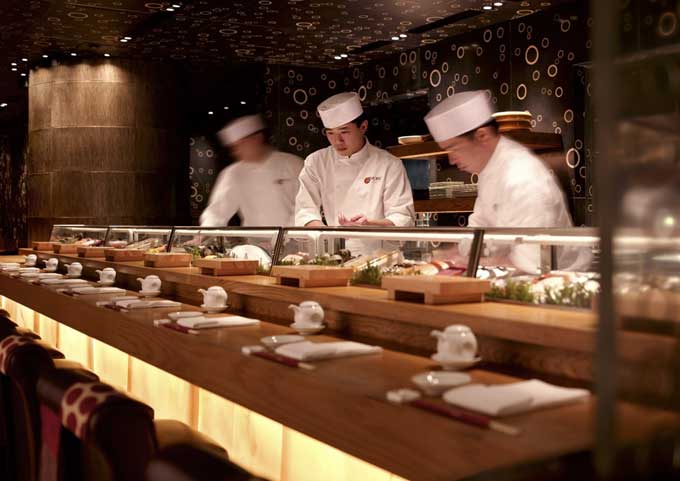 1. Interact with the itamae (sushi chef): When sitting at the sushi bar, always order directly from the itamae. Ignoring him is considered disrespectful and the best way to strike up a rapport is by asking for a recommendation.

2. “Is the fish fresh?”: You can ask which fish is the freshest? But NEVER ask if any given fish is “fresh”, since this implies it might not be fresh. Which is rude.

3. Ask the itamae ONLY for sushi: And sashimi. Any other items and beverages, including soup, edamame or other side items, should be requested from a server.

4. Order carefully: And inform the itamae of any allergies or dislikes. It is impolite to leave food on your plate after a meal or turn up your nose if you don’t like a particular item.

5. Order one at a time: It’s polite to order only one sushi roll at a time. If the bar is busy, you can order up to three at one go but never more. When in a rush, order chirashi sushi – it’s faster to make and eat.

6. Don’t dawdle: Never let fresh sushi sit for too long as this will degrade the temperature, texture and moisture – all of which impact the taste.

7. Repeat, please: Feel free to ask for a repeat of anything you especially liked. 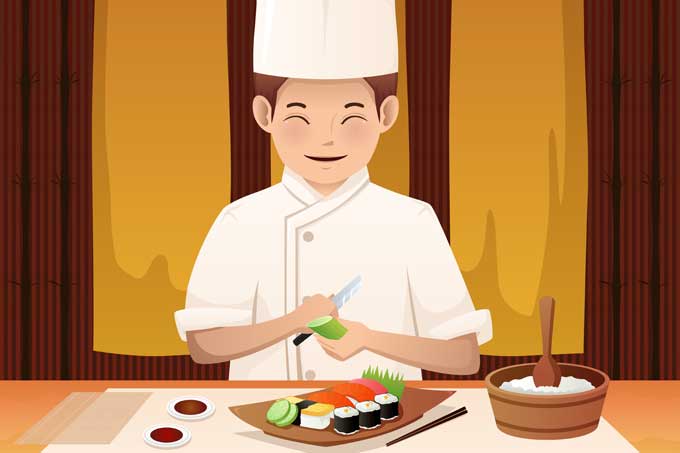 9. Be gracious: It’s just good manners to thank the itamae. If you want to go the extra step, try some Japanese. Domo arigato means “thank you”, while oishikatta desu translates as “it was delicious”.

10. Time to tip: Many sushi bars have a tip jar as the itamae will never touch money (since he touches food). The wait staff would be tipped separately.

11. Try omakase dining: Finally, consider omakase on your next visit. In this, the itamae chooses dishes for the diner as well as the order in which these dishes will be served. It’s a way to compliment the chef AND ensure that you get the freshest, choicest sushi. So, this means a win-win for all. But remember, it also gives the itamae free reign to serve you anything, including strange items like live shrimp!

Now that you know your maki from your nigiri and aji from aayogi, it’s time to take a seat at the sushi table. But what’s the best way to eat this Japanese delicacy? Can you eat it with your fingers? Should wasabi be stirred into the soy sauce or spread directly on the roll? One mouthful or two?

Add to this the famed Japanese penchant for fusing form with function, which means the flavor and experience of sushi is influenced not only by how it’s prepared, but also by how you eat it.

Suitably challenged? These guidelines will help you thoroughly enjoy your next sushi adventure. 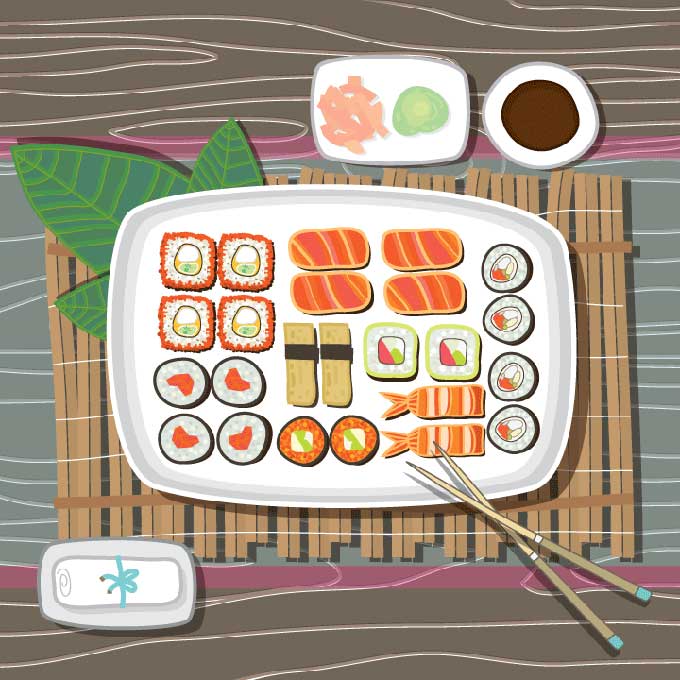 How to eat sushi

2. Use your hands: Sushi actually began as finger food. So yes, it’s PERFECTLY all right to eat it with your fingers. In fact, most sushi masters prefer using fingers as this allows you to experience the texture and helps keep everything together. Plus, it is hard to properly dip the fish using chopsticks.

3. Know your condiments: Typically, a plate of sushi includes some pungent wasabi – Japanese horseradish – which looks like green paste. Soy sauce is called murasaki, which means”purple” and comes in a shallow dish. Then there is pickled ginger (gari) placed in thin, pink slices on the side of the plate

4. Don’t mix the condiments: Aka, don’t pour wasabi into your soy sauce. Wasabi should always be spread directly on the fish.

5. Dip your sushi fish-side first: Turn your sushi upside down, then dip only the fish into your soy sauce – never the rice. Else the rice may soak up too much soy sauce, ruining the balance of flavours. Plus, the molded rice will disintegrate if it’s dipped directly into soy sauce.

6. Do not dip elaborate sushi: If the sushi has a glaze or sauce on top (usually the case with nigiri), do not dip it in the soy sauce, as this will mess up the flavours.

7. Be careful with the wasabi: Dab just a small bit onto your sushi, so you don’t overpower all other flavours. If you are eating nigiri, the chef may have added wasabi between the fish and the rice, so try a piece before adding more.

8. Eat from lightest to darkest: Start with the mildest fish (like flounder) and work towards the heavier tuna. If it’s a platter of different kinds of sushi, begin with nigiri and maki, followed by more elaborate rolls or temaki. The milder flavors come first, so they are not overpowered by the bold flavors.

9. Rice follows fish: Sushi pieces should be placed in the mouth upside down so that the fish lies against your tongue. This allows you to taste the fish more than you taste the rice.

10. Eat the sushi in one bite: Traditionally, each piece of sushi should be eaten in one bite. If you really can’t eat the piece in one bite, hold it with your fingers until you are ready to finish. It is poor etiquette to return a half-eaten piece to the plate.

11. Cleanse your palette with ginger: The ginger is never meant to be eaten in the same bite as the sushi. Instead, use it refresh your mouth between bites, especially between different types of sushi. Think of it as a taste bud reboot!

Plus, how to pair your sushi

Just a roll of sushi does not a meal make. So, here’s how to pair it with the right beverages and other dishes to create the perfect menu.

2. Beverages: Typically, experts avoid drinking sake with sushi, since they are both rice-based and may interfere with each other. Green tea, water and a mild beer make the best pairing, while wines and soft drinks will overpower the subtle flavors of sushi. However, this is really a matter of personal taste.

3. Rounding it off: Many sushi restaurants serve agari – green or brown roasted tea – at the end of a meal. Or you could opt for miso soup, which is traditionally enjoyed at the very end of the dining experience. 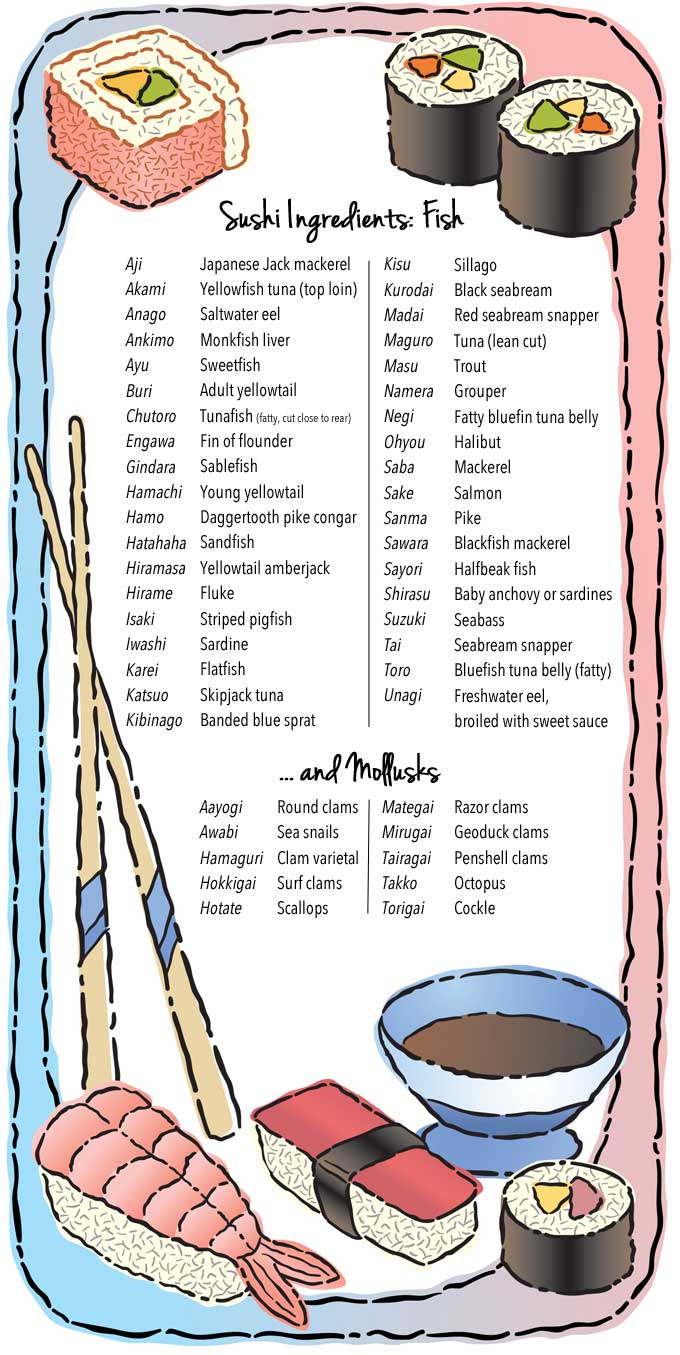 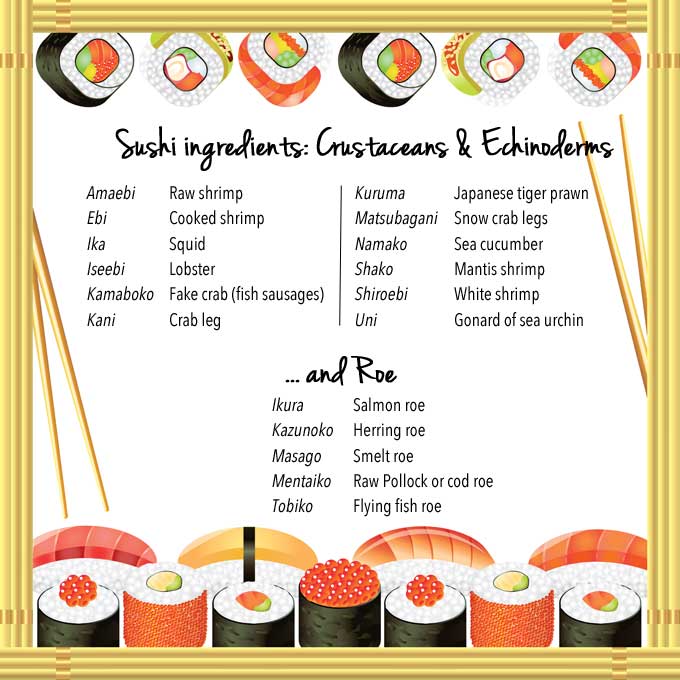 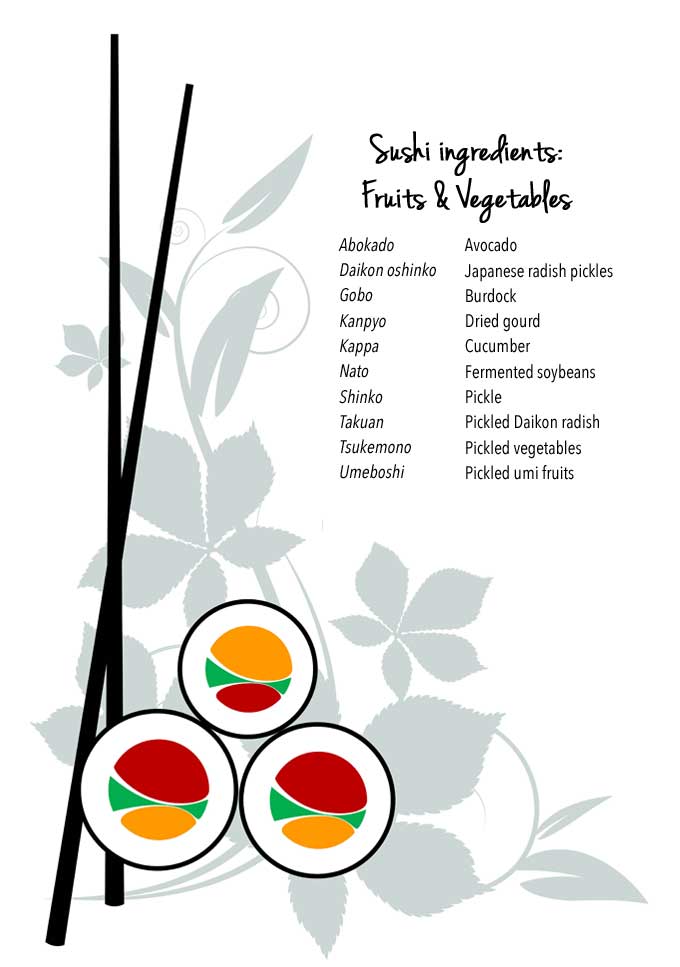 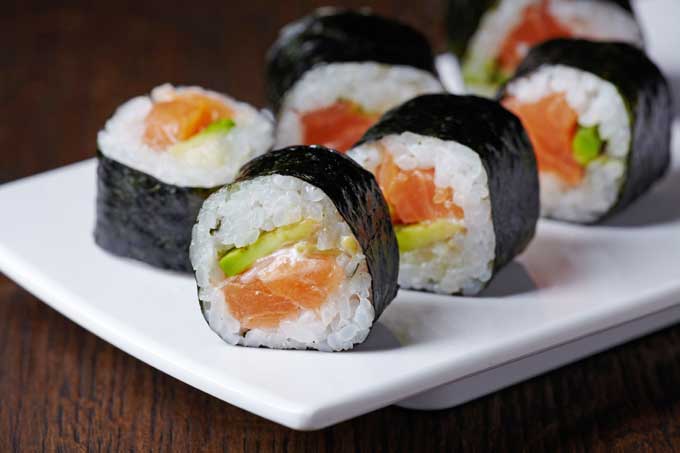 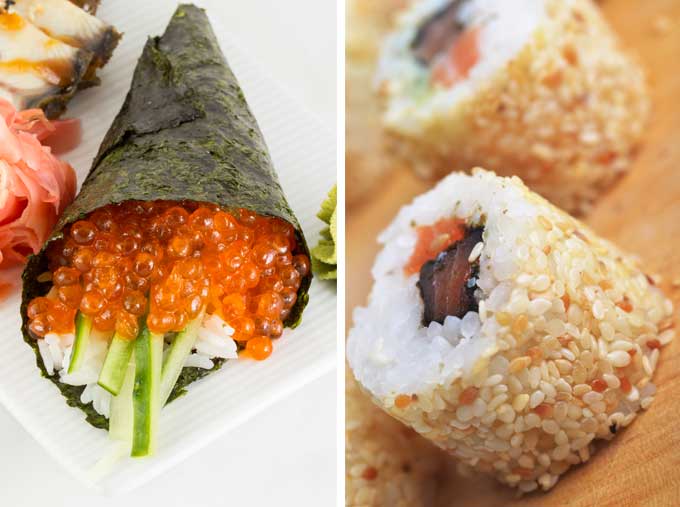 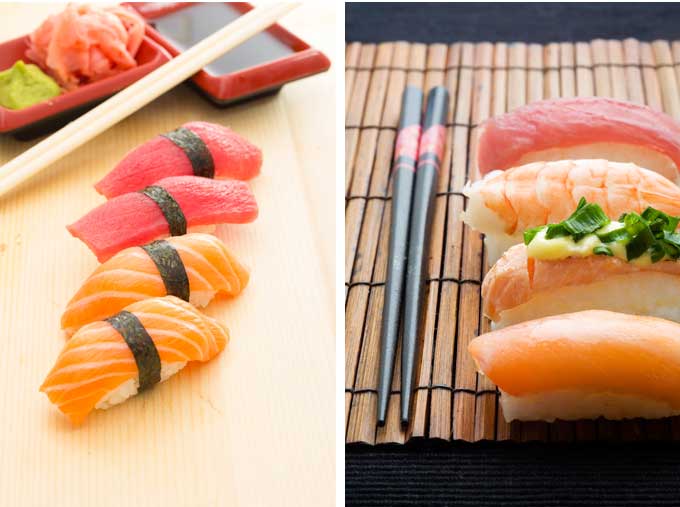 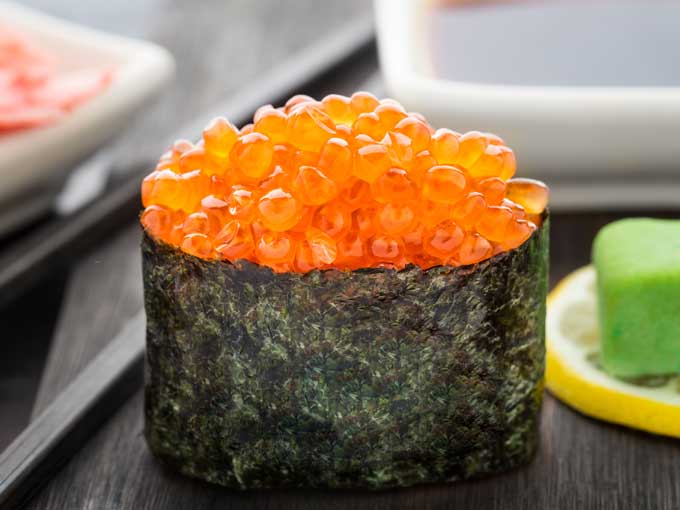 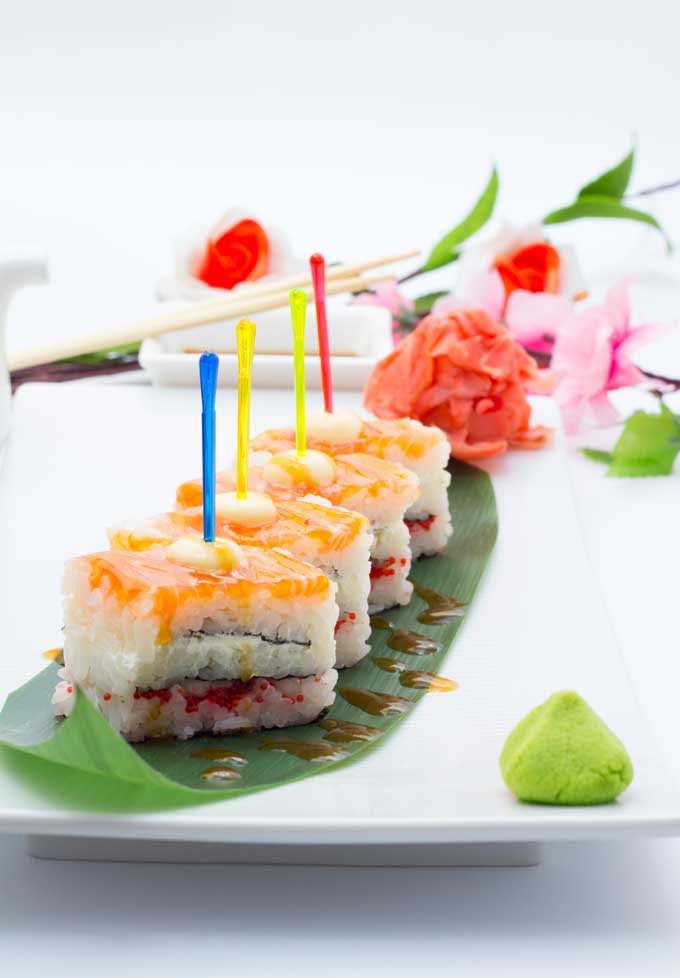 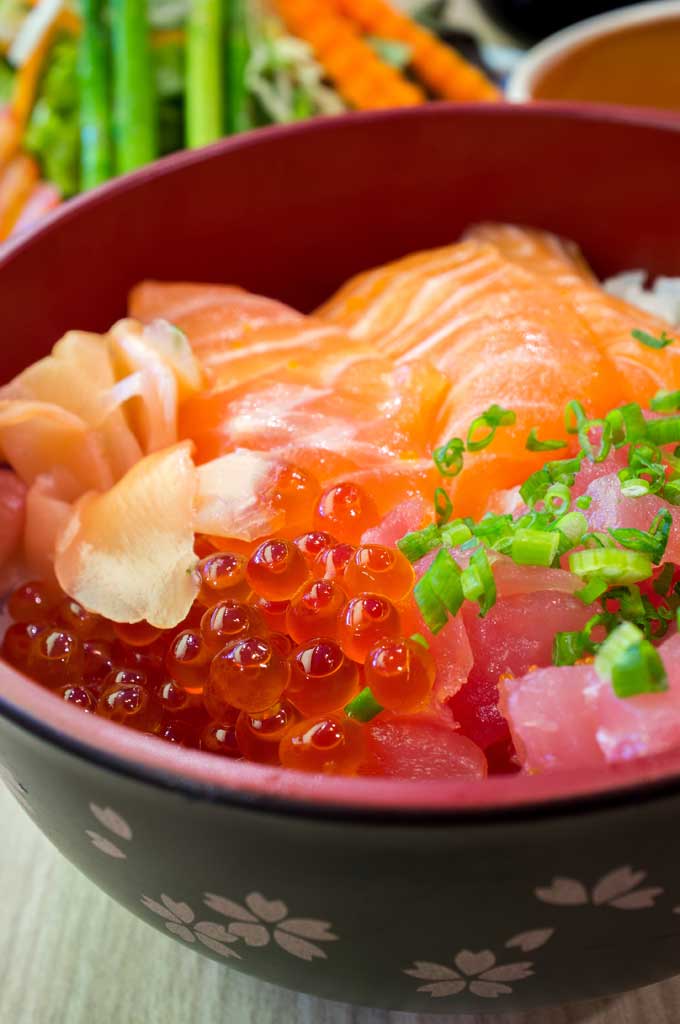 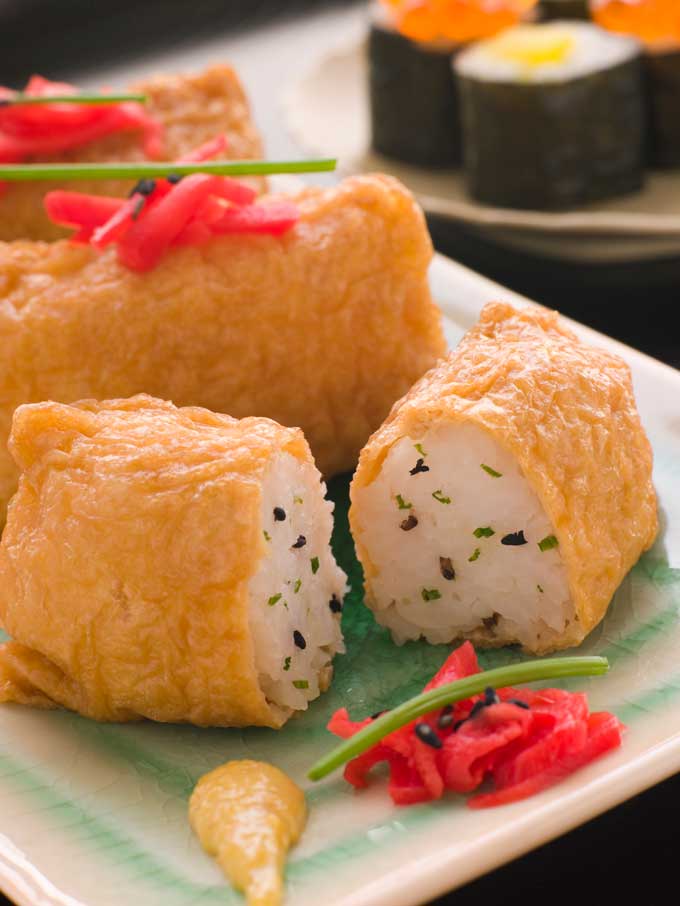 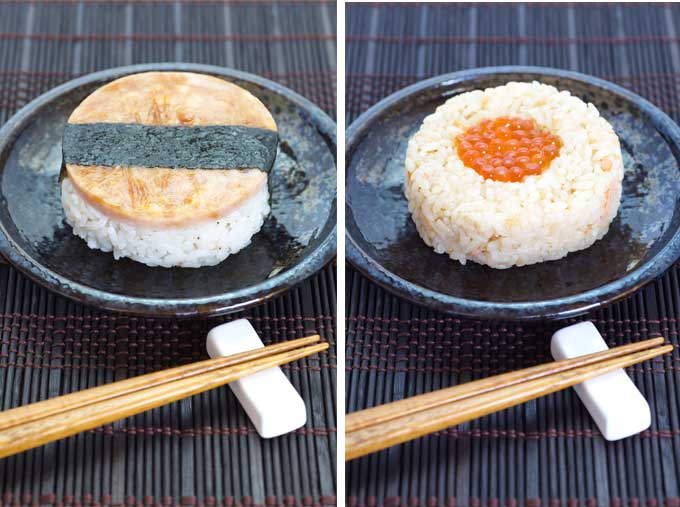 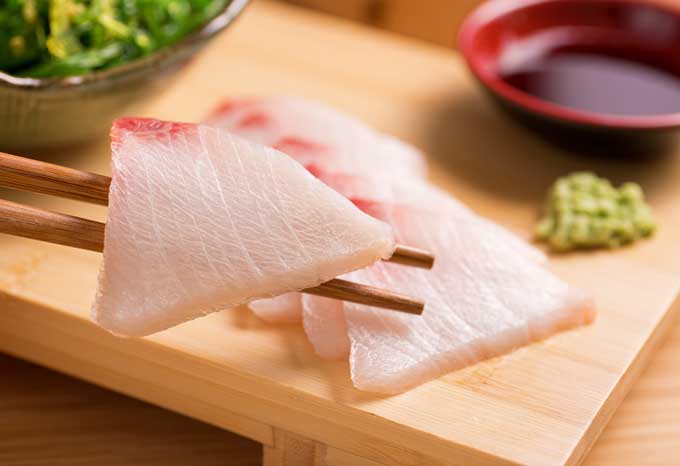